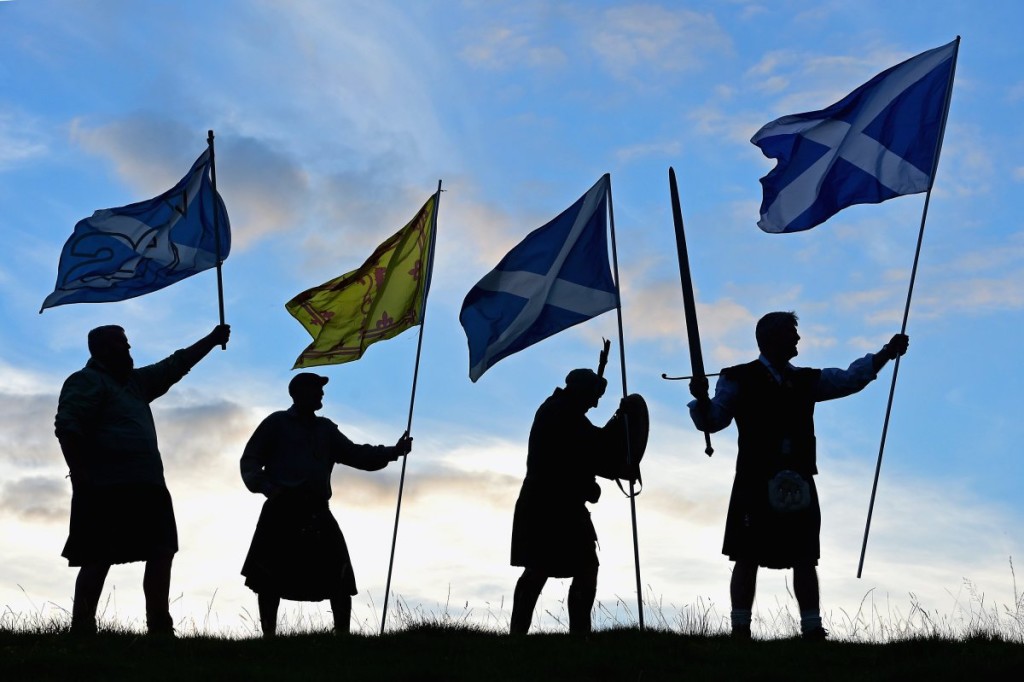 LOCH LOMOND, SCOTLAND – SEPTEMBER 14: Duncan Thomson, Brian McCutcheon, John Patterson and Arthur Murdoch,from King of Scots Robert the Bruce Society, hold the Scottish flags as they prepare to vote in the Scottish independence referendum on September 14, 2014 in Loch Lomond. The latest polls in Scotland’s independence referendum put the No campaign back in the lead, the first time they have gained ground on the Yes campaign since the start of August. (Photo by Jeff J Mitchell/Getty Images)

In the general news, Scotland voted to stay within the United Kingdom government rather then secede. The U.S. will send more troops to Iraq to battle ISIS, as well as do air strikes within Syria. Back at home, the number of people without healthcare insurance fell by 8% as the ACA (Obamacare) kicks in, and NASA awarded contracts to carry humans into space to Elon Musk’s SpaceX as well as Boeing. In sports, the NFL domestic abuse scandals dominated the regular non-sporting news. Lastly, Alibaba (BABA) went public as the largest IPO ever.

From the FDA, the AstraZeneca (AZN) and Nektar (NKTR) opioid-induced constipation drug Movantik was approved. Regeneron (REGN) won Breakthrough status for the diabetic retinopathy indication they seek for Eylea. Novo’s liraglutide won a panel OK to add weight reduction to the label. Eli Lilly’s (LLY) Trulicity was approved to treat Type 2 diabetes. A panel voted to restrict the labels for testosterone drugs, such as Androgel and Axiron, to not include loss of libido and energy, in order to reduce the number of TV ads and marketing. Lastly, a White House panel called for a task force to study the impact of the overuse of antibiotics in animals.

Post Views: 668
This entry was posted in - The Weekly Summary. Bookmark the permalink.