Tony’s Virus: Chapter 8: You Can’t Always Get What You Want 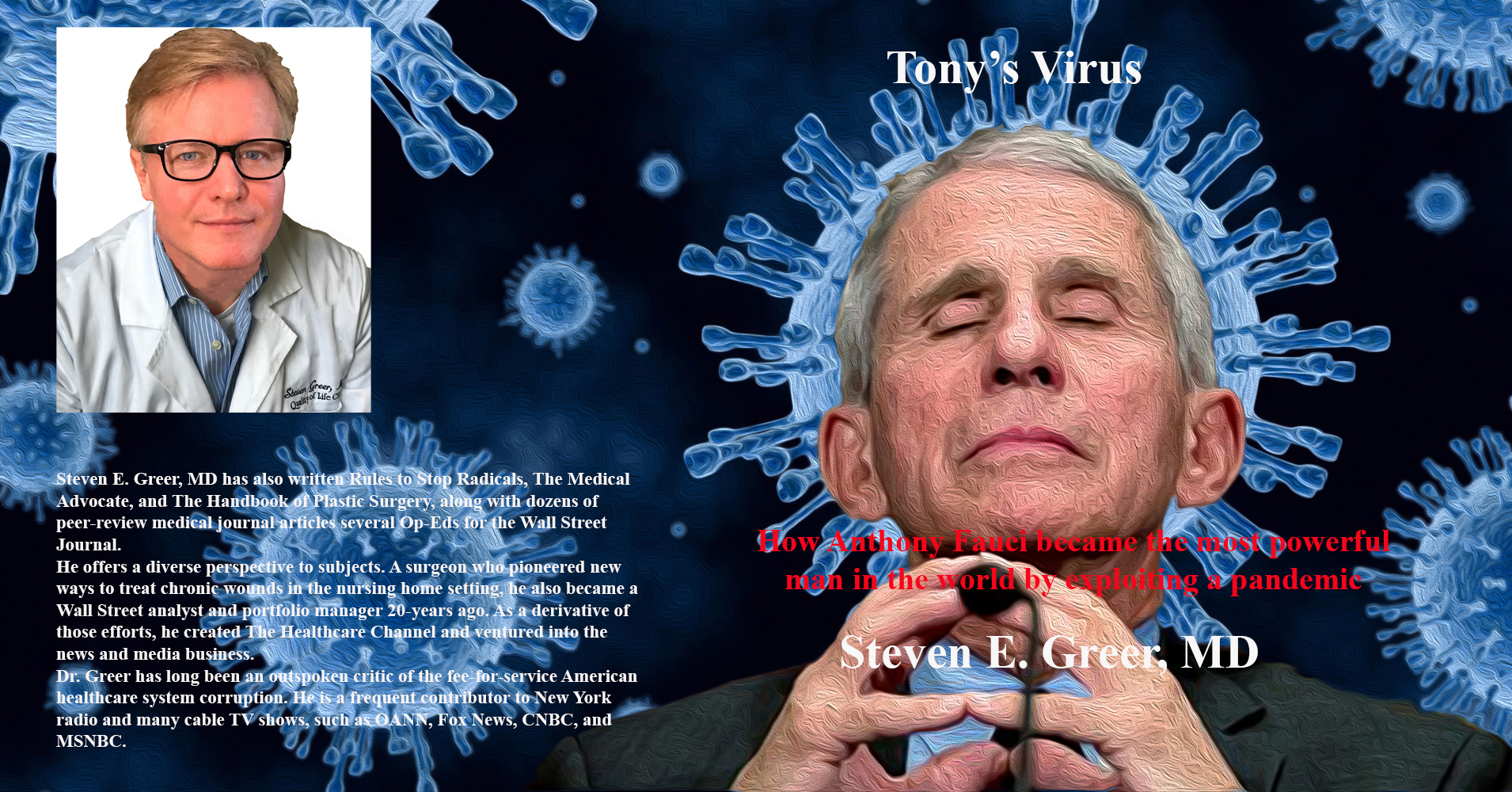 On Friday, October 2nd, 2020, the White House announced that President Trump had tested positive for the Wuhan virus. Later in the day, he walked across the lawn onto Marine 1 and headed to Walter Reed Naval National Military Medical Center to be treated with the best possible drugs available on the planet at the time (to be detailed in a subsequent chapter). On Monday, he walked out of Walter Reed, flew back to the White House, and looked to be in 100% health. 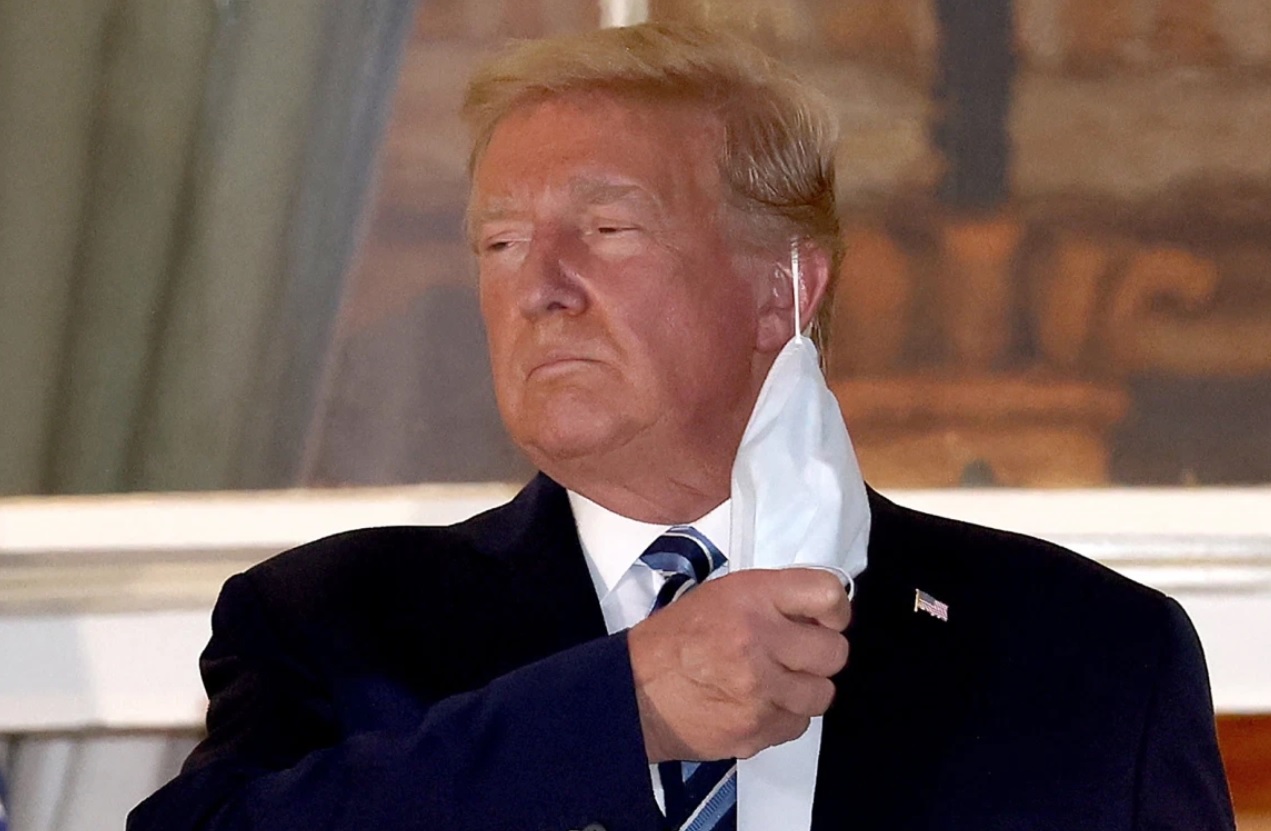 How does that treatment strategy and drug regimen compare to what any other American would receive after testing positive? Forgettaboutit. You can’t always get what you want.[1]

The dirty secret that has not been reported (until this book came out) is that medical centers across the nation are still refusing to accept patients with symptoms of the Wuhan virus (as of October, 2020). Even those patients who test positive are told to stay home and drink water, essentially, until their condition deteriorates and they need serious medical care in the ICU. If that sounds like the absolute opposite of what President Trump received, that’s because it is.

The medical actions taken after President Trump was diagnosed with the SARS-COV-2 Wuhan virus were correct and cutting edge. The key component of his treatment was the immediate nature of it. We know that this virus has been engineered (i.e. “gain-of-function”) in Tony Virus’ NIH-funded labs to attack the ACE-2 receptors, which means blood vessels in our lungs, kidneys, etc. are assaulted, leading to micro-blood-clots. After that, a massive inflammatory cascade is unleashed, which causes more damage. To prevent a serious decline in health, often with permanent affects, the damage must be prevented. This means that the therapies must be given early.

In President Trump’s case, he had a medical team willing to see him, draw blood, and perform tests without delay. However, for the rest of us, that type of care is now impossible to obtain from most hospitals.

For the person who is symptomatic, in need of urgent medications, they are literally told to NOT come to emergency room, hospital, or even their primary care doctor’s office. They are instructed to make an appointment, in most cases, and drive through some tented parking lot facility to have their nasopharynx swabbed for a PCR test, which takes at least 24-hours to get results. Then, a day or so later, if they are positive, they are still not allowed into a hospital unless they have serious symptoms.

In other words, the current treatment regimens being copied by American hospitals are almost the exact opposite of what should be delivered. The gutless, politically motivated, bureaucrats leading these large quasi-government medical centers, earning multi-million-dollar salaries, are circling the wagons in hope of achieving protection by numbers. They are building the case for the future defense of, “We all did the same thing. Therefore, we all cannot have been committing malpractice on a scale never before seen.” But they were. This is a crime against humanity, as will be detailed in subsequent chapters.

I learned of this after my parents came down with symptoms and I tried to have them tested and treated at The Ohio State University Medical Center. I communicated with senior management who informed me of the following protocol: A) People with symptoms, such as cough and fever, are not allowed to be seen in the emergency room. By appointment, they are instructed to drive to an off-campus parking lot to have a nasal-swab PCR test that takes about a day to get back. B) For those who test positive, they are instructed to home-quarantine. No medications, such as hydroxychloroquine, zinc, or vitamin D are prescribed. They are told to stay hydrated. C) Only people in acute respiratory distress, with decreased oxygen saturation (i.e. near death), will be seen by the ER.

To determine whether this was standard procedure or an aberration, I called around. Johns Hopkins, 400-miles to the East, The Cleveland Clinic, 120-miles North, New York University Medical Center, 540-miles to the East, and UCLA, 2,260 miles to the West, all had the same policies of setting up strong defenses around their campuses to keep the sick out.

Why are hospitals preferring these incorrect policies rather than treating the patients urgently? Normally, American medicine would financially reward these hospitals if they gave millions of Americans very costly intravenous medications, such as remdesivir, then costly medical imaging, ICU care, etc. This should be a windfall for them. Why are they missing the opportunity? That is a very good question. The actual answer evades this author, but I have a guess: misguided politics are one reason.

First, to be clear, lack of medications or personal protective equipment are not the reason hospitals are setting up barriers to treatment. Every drug that President Trump received is available in ample supply to those who need it, with the exception of the still-experimental Regeneron antibody drug. Remdesivir, dexamethasone, hydroxychloroquine (although it appears in this case that Trump did not receive this), vitamins, and even plasma donated form people who have the antibodies, are easily obtained by any large medical center. All of these therapies are effective at saving lives and would generate high profits for the hospitals. So, again the question, why are they not being used on a large scale for regular Americans?

First, one needs to understand that all medical centers are really government institutions, whether they are officially listed as for-profit private hospitals or public hospitals. That is because their revenue is mostly derived from the federal and state governments via Medicare and Medicaid, etc. In many cases, they are the largest employers in the region. They have been turned into jobs creation programs by governors.

So, when this scamdemic first began to be recognized around March of 2020, the Democrat governors called the shots in New York, New Jersey, Connecticut, Pennsylvania, Michigan, California, etc. (Even so-called Republican governors, such a Michael DeWine of Ohio and Greg Abbott of Texas, cowered to the peer pressure and joined the flock of sheep.). Since the epicenter was in New York, that meant Governor Andrew Cuomo was really leading the efforts for much of the nation. As detailed in previous chapters, Cuomo botched it very badly indeed.

However, bad governors and the bureaucracies they run do not like to admit wrongdoing. Their response to mistake is first to deny, then lie, and then double down. As of October, when this chapter was written, nine-months after the first mistakes were made in New York, most hospitals in the country are still doubling down, refusing to admit they were wrong, and still denying crucial early care to people with the Wuhan virus.

Peeling this rotten onion one more layer, what led to Cuomo, et al, making these fateful decisions? Well, it was a combination of sheer panic and a desire to avoid bad optics, this author speculates.

In New York, the wealthy regions of the city and state wanted to keep the hot spots in Brooklyn and Queens isolated. Marc Siegel, MD of NYU was on Fox News, via remote feeds from his safe apartment, openly begging sick people to not seek medical care at his hospital. Nicole Saphier, MD, another Fox News contributor, was becoming famous too speaking remotely from her apartment, looking glamorous, never stepping foot in her Memorial Sloan Kettering hospital for months. However, they represented almost all doctors in Manhattan, The Hamptons, wealthy parts of New Jersey, etc. These cowardly doctors were personally afraid of the virus and threw the patients under the bus, in my opinion.

What transpired was an unprecedented act in American modern medicine. In previous pandemics, ranging from the Spanish Flu of 1918 to the Ebola outbreak of 2014, doctors never told the sick to stay away. Bellevue Hospital courageously treated the much deadlier Ebola virus victims, after all.

As the doctors were panicking during this scamdemic, Governor Cuomo was seeing the images from Italian hospitals that were overflowing with patients and wanted to avoid the same bad optics. In fact, the entire strategy from the federal government at the time, led by Tony Virus, was to “flatten the curve” so as to avoid running out of hospital capacity. Therefore, in addition to committing the nursing home massacres detailed previously, Governor Cuomo’s New York health officials started to quarantine the actual hospitals from the sick people rather than place the sick people in the hospitals to be quarantined!

This type of backassward, illogical, insane policy by feckless government leaders during times of crises is typical. Many books have been written about it, such as Kurt Vonnegut’s Slaughterhouse-Five and Catch-22.

[1] President Trump plays this Rolling Stones song at his rallies.