The similarities between Cuba and Syria 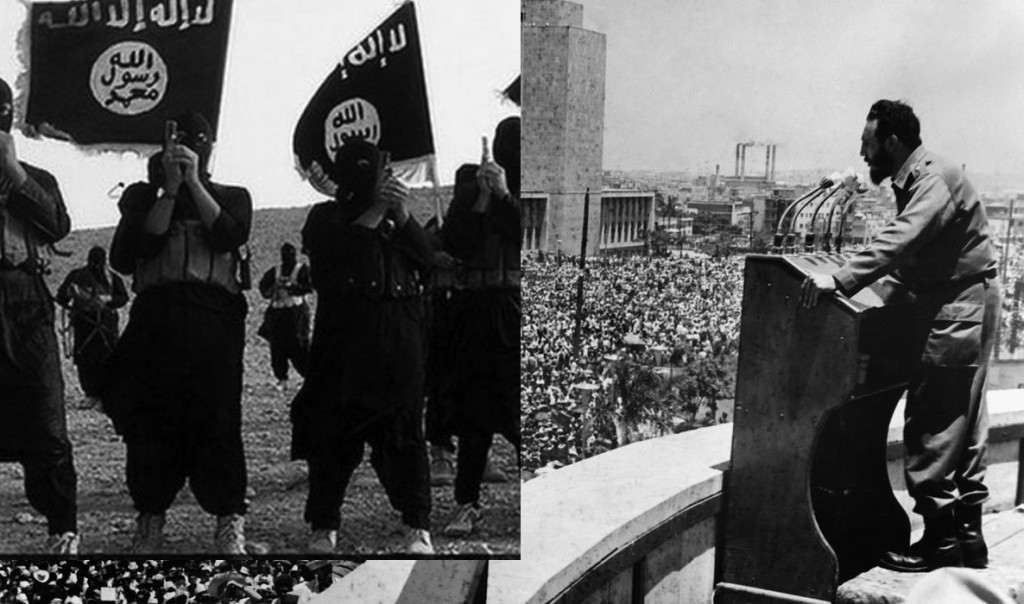 I watched a PBS documentary of Fidel Castro called The Fidel Castro Tapes. The similarities to current-day Middle East policy became apparent to me right away. Perhaps this was precisely why PBS was airing this show again, days after the ISIS attacks on Paris.

America has a long history of feckless foreign policy guided by stupid “intelligence” from the CIA and or spineless presidents. History keeps repeating itself.

In 1959, after Castro overthrew the Batista regime in Cuba and his country was broke, he came to America seeking financial and other aid. However, President Eisenhower refused to meet with him because Castro was suspected of leaning toward communism. He sent Vice President Nixon to meet with him instead.

When Castro landed in the U.S. in 1959, he was very popular with the American public and mobbed as a hero. However, the U.S. ultimately declined to give Castro financial support after Nixon told Eisenhower that Castro could not be trusted.

This drove Castro straight into the hands of Russia. Nikita Khrushchev seized upon the strategic blunder of Eisenhower and Nixon and folded Castro’s Cuba into their Soviet Union of communist states. So, the U.S. turned away a potential ally and allowed it to become a full-blown communist red state.

Then, the geniuses of the brand new John F. Kennedy presidency planned the Bay of Pigs coup in 1961. Using surrogate Cuban freedom fighters, the attempted-overthrow of Castro failed miserably.

The Bay of Pigs drubbing sent Khrushchev the message that the U.S. was unwilling to send actual American troops into Cuba. Consequently, he then sent Soviet Union nuclear missiles right into Cuba, causing a naval blockade by The U.S., and nearly a nuclear war.

The similarities between the United States’ handling of the upstart dictator in Cuba back in 1959 and the contemporary menace to the world, ISIS, are glaring.

Both in 1959 and current-day, The U.S. created our own enemies (Castro and ISIS) by first planting the seeds, then mishandling them after they were sprouting. The U.S. missed an opportunity to make Castro an ally in 1959. ISIS was created when the U.S. refused to hire ex-Saddam Hussein military leaders and turned them into desperate unemployed enemies.

The U.S. failed to realize that the Soviet Union would turn Cuba into a satellite state 90-miles from our border, and it has ignored ISIS since 2006. As recently as this year, President Obama had his National Security Advisor Suisan Rice say in a speech that ISIS was not an “existential threat”. Oh really?

Both in 1961 and current day, Russia stepped in to fill a vacuum of leadership created by American inaction. Khrushchev aided Castro and planted missiles on the island after Kennedy refused to send in American forces. Likewise, Vladimir Putin invaded the Ukraine, Crimea, and placed troops in Syria after President Obama publicly stated that he would not send in American troops to any of those hotspots.

In both 1961 and current day, the U.S. chose to use ineffective CIA-led surrogate armies to deal with the dictators of Castro in Cuba and al-Assad in Syria. Both efforts failed miserably. The Bay of Pigs soldiers were arrested and killed. The CIA-funded Syrian fighters have also been a complete debacle.

In both states of Cuba and Russia, the U.S. tried to slowly overthrow, or cause capitulation from, the leaders by using financial sanctions and trade embargoes. The citizens of those countries suffered while the leaders continued to live high off the hog and avoid mass uprisings.

With both Cuba and current day Syria, the U.S. failed policies have led to millions of refugees. In 1980 during the Mariel Boat Lift, President Carter allowed tens of thousands Cubans to flood Miami, many of whom were criminals straight from Cuban prisons. Now, far more are fleeing Syria and the U.S. will take in at least 10,000 of them.

This country needs better strategies for dealing with upstart threats from unstable parts of the world. Our huge military can keep China and Russia at bay, but this country has had poor success at preventing new threats from growing.

Small and novel hazards to national security are handled by the CIA. The CIA has repeatedly given bad advice and intelligence to the presidents of this country.

The comparison of current policy in the Middle East to Cuba is just one of many that can be made. Consistently, our CIA-guided foreign policy has been too cute, too Machiavellian. After a while, vertigo sets in, all moral compasses go bad, and the tail begins to wag the dog.

At one point, our CIA was directly creating the crack cocaine scourge in Southern California by enabling drug dealers who then funneled the billions of dollars into the Iran-Contra secret war. Sheer genius.

If key corporate decisions in the private sector were determined in the same manner as is our national foreign policy, those companies would fail faster than Hewlett Packard. The President of the United States, acting as the Commander-in-Chief, needs to make key decisions on his or her own. Too many “intelligence briefings” and decisions-by-committee lead to disaster on a global scale.

What you need to know about ISIS