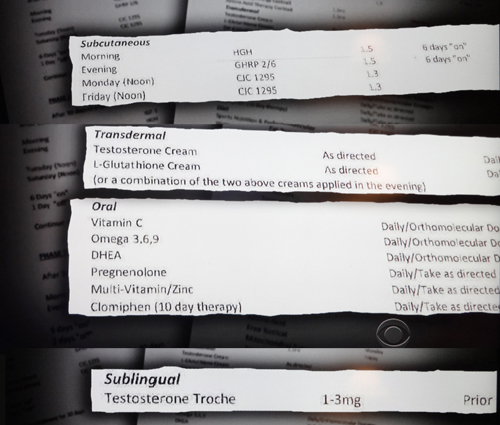 CBS’s “60 Minutes” interviewed the man, Anthony Bosch, claiming to have been the pseudo-doctor who administered MLB’s Alex Rodriguez’s PED schedule. Mr. Bosch is not a doctor, but went to a foreign medical school for a short period.

The number of daily injected drugs is alarming. The sublingual oral steroids taken before games is also very unusual. A-Rod was told to pop a “Troche” minutes before a game. Mr. Bosch seems to think that testosterone has a rapid onset of action of just minutes. That is not the case.

The dosages and unusual scheduling indicate that A-rod might have been receiving ineffective therapies from a quack, which would be ironic, indeed. Was A-rod merely boosted by the placebo effect of these “Troche’s”?

However, the drugs that do seem to have been effective were the topical testosterone gels and the HGH. The clomiphene was used to offset the testisticular down-regulating effect of exogenous testosterone. The GHRP is also meant to offset the blunting of the pituitary axis caused by HGH.

Post Views: 1,453
This entry was posted in - Opinion, - Pharma, Congress, Diabetes and endocrinology. Bookmark the permalink.