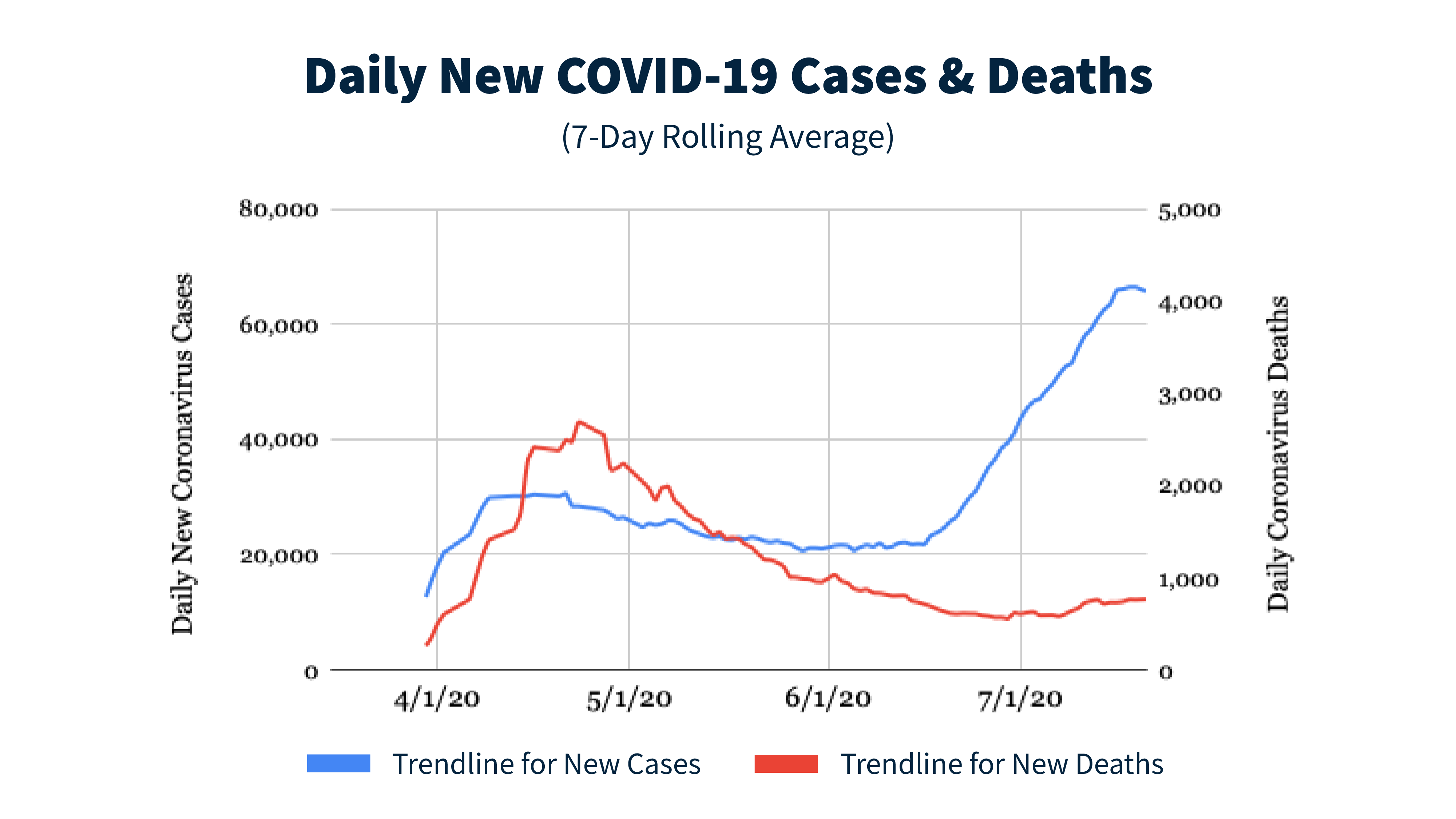 As the propagandists in the mainstream media continue their full-court-press of fearmongering, desperately trying to prevent more months of record jobs employment numbers and quick rebound to the virus shutdown, something else is happening. Instead of the “surge in new cases” the press wants us to believe, the opposite is true. The virus seems to have run into the herd immunity brick wall, meaning the pandemic is over.

The Atlantic reported on Harvard researchers who used chaos theory math to build models estimating what portion of the population infected would be required to deliver herd immunity and stop the pandemic. They are coming up with a low number of only 20%. This means that New York City has already reached herd immunity, which is consistent with the latest data from the White House and New York showing no increase in deaths.

Then, Oxford University professor Sunetra Gupta, who specializes in theoretical models of pandemics, who was the first to refute the wildly inflated estimates of death by Neil Ferguson, was interviewed. She stated, “According to scientific research, between 30 and 81 percent of the global population have T-cells from previous colds and flus that could automatically recognize the threat of the coronavirus, making them immune.

A large number of Australians will also be asymptomatic if they came down with the virus.

Professor Gupta argued it would be better to let COVID-19 spread in the community and have stronger measures to protect the vulnerable – such as the elderly or sick.

‘You can only lock down for so long unless you choose to be in isolation for eternity so that’s not a good solution,’ she was quoted saying.”

In a different interview with Gupta, “It’s the biggest question in the world right now: is Covid-19 a deadly disease that only a small fraction of our populations have so far been exposed to? Or is it a much milder pandemic that a large percentage of people have already encountered and is already on its way out?

If Professor Neil Ferguson of Imperial College is the figurehead for the first opinion, then Sunetra Gupta, Professor of Theoretical Epidemiology at the University of Oxford, is the representative of the second. Her group at Oxford produced a rival model to Ferguson’s back in March which speculated that as much as 50% of the population may already have been infected and the true Infection Fatality Rate may be as low as 0.1%.

As she sees it, the antibody studies, although useful, do not indicate the true level of exposure or level of immunity. First, many of the antibody tests are “extremely unreliable” and rely on hard-to-achieve representative groups. But more important, many people who have been exposed to the virus will have other kinds of immunity that don’t show up on antibody tests — either for genetic reasons or the result of preexisting immunities to related coronaviruses such as the common cold.

The implications of this are profound – it means that when we hear results from antibody tests (such as a forthcoming official UK Government study) the percentage who test positive for antibodies is not necessarily equal to the percentage who have immunity or resistance to the virus. The true number could be much higher.

Observing the very similar patterns of the epidemic across countries around the world has convinced Professor Gupta that it is this hidden immunity, more than lockdowns or government interventions, that offers the best explanation of the Covid-19 progression:

“In almost every context we’ve seen the epidemic grow, turn around and die away — almost like clockwork. Different countries have had different lockdown policies, and yet what we’ve observed is almost a uniform pattern of behavior which is highly consistent with the SIR model. To me that suggests that much of the driving force here was due to the build-up of immunity. I think that’s a more parsimonious explanation than one which requires in every country for lockdown (or various degrees of lockdown, including no lockdown) to have had the same effect.”

Asked what her updated estimate for the Infection Fatality Rate is, Professor Gupta says, “I think that the epidemic has largely come and is on its way out in this country so I think it would be definitely less than 1 in 1000 and probably closer to 1 in 10,000.” That would be somewhere between 0.1% and 0.01%.”

This is all more evidence that the current attempts in this country to “social distance” and prevent the spread of The Wuhan virus are not only unnecessary, but also counterproductive. No one else in the media is connecting the dots in this way. What Dr. Gupta and others are telling us is that this pandemic was, A) never dangerous to most people to begin with, and B) has reached herd immunity and is over.