Lethal force in Ferguson was unnecessary, yet few lessons seem to have been learned 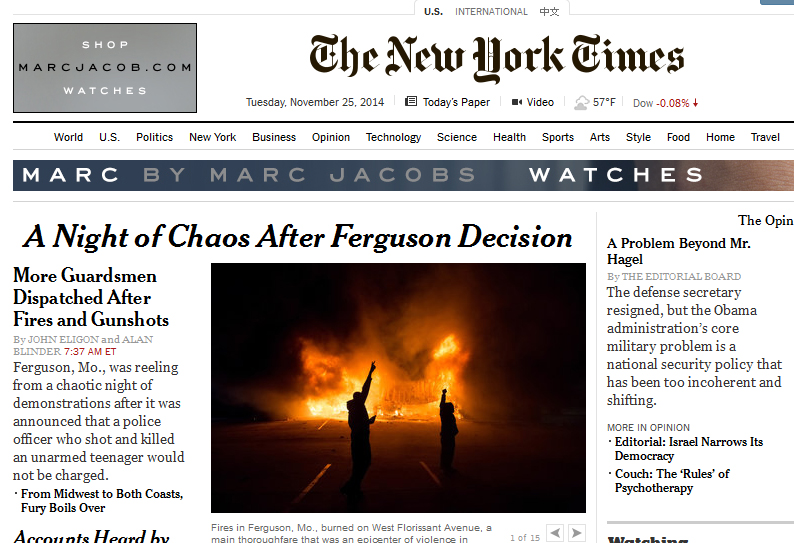 There are huge problems with most police forces in this country. However, despite all of the riots this week, not a damn thing will change. There is no indication in the media, or from comments by the President, that fundamental changes in the training of police will happen as a result of the riots across the country this week.

The Cleveland cops who shot the 12-year-old boy exemplify it so well. There was a lone boy on a cold empty playground. There were no hostages. There was no urgent need for the police car to come storming onto the scene within feet of the kid, yet they did. The cops were influenced by adrenaline and provoked a fight.

The Cleveland police force claimed during a press conference that three commands to drop the toy gun were given and that the boy refused to comply. Therefore, they were justified in shooting him dead.

Nonsense. The video clearly shows that they startled the kid by driving right up to him, then blew him away two-seconds after opening the car door; literally, two-seconds.

Police in this country are trained that it is acceptable to use deadly force if a suspect simply does not comply with an order. The slightest excuse for the police to claim that they feared for their safety is always accepted by districts attorney across this land.

Flagrantly insane schizophrenics can be shot dead, and the police will be exonerated if they claim that they “saw a knife”. In 2012, a mentally ill man was slowly cornered by a team of NYPD. Then, infectious fire turned him into Swiss Cheese with 12-bullets killing him.

In Arizona, a white man was holding his 9-month-old grandson, unarmed, and was shot in the head by a police officer. That officer had been involved in six prior fatal shootings, and was cleared in all cases.

Who trains these officers? Any person watching the video can see that the gunfire was unnecessary. The cops were just flexing their muscles, sending the message, “Obey our law or else we will murder you.”. When did police get the license to kill like James Bond 007?

Most of the police responses in the country seem to be geared toward intimidation in order to send a message of deterrence. The officers that show up to conflicts seem to have little desire to deescalate crises. Quite the opposite actually: They often inflame harmless standoffs into executions. SWAT teams kick open doors and shoot people when they dare act surprised. Mentally ill are scared into acting worse, then shot, etc.

Throughout this week of news coverage of the Ferguson grand jury decision, and the subsequent riots, not a single news organization asked the questions raised above. The death of Michael Brown turned into the predictable, boring, race issue, fueled by the never-elected-to-anything “Reverend” Al Sharpton.

Now that we know more facts in the Ferguson case, the shooting was still unjustified. Despite the young Mr. Brown being an aggressive petty thief fresh off from a convenient store heist, looking for trouble, the death penalty was not the appropriate punishment, to say the least.

A scuffle took place in the police SUV between Mr. Brown and the police officer, Darren Wilson. Shots were fired. Then, the aggressor Brown fled.

The police officer should have backed off and waited for backup. Instead, the irate cop, looking to show that he was the boss, acted like John Wayne pursuing a robber in a bad Western. The pursuit and deadly shooting could have been avoided. Michael Brown could have been arrested later in his home and sentenced to a minor punishment. Instead, he got the death penalty.

Experts interviewed on the matter agree that deadly force was not the only option for Officer Wilson. The New York Times wrote, ““The only option I thought I had was my gun,” he said, according to a transcript of his testimony. That conclusion was confounding to Edward Davis, who retired last year as Boston police commissioner after 35 years as an officer there and in Lowell, Mass. “There has been a significant change in the use of force by police in the 35 years I’ve been in the business — new tools like Tasers and really effective pepper sprays,” Mr. Davis said. “When you look at the whole way this situation transpired, it’s disappointing to see someone not use those intermediate tools available.””

There was a viral YouTube this year of a California Highway Patrol Motorcycle officer who looked like a coward to many people because he allowed unruly bikers to ignore his commands to pull over. However, this officer did the right thing. He left the scene and called for backup. The license plates were easily seen. The punks were easily arrested later on.

If a highly trained Navy SEAL team encountered a mob of bad guys in Iraq on a highway, similar to the California Highway Patrol incident, they would likely act in the same intelligent manner. They would leave the scene, get backup, then deal with the problem in the smartest strategic manner (i.e. a drone).

But police officers are not given the expensive rigorous training of Navy SEALS. Yet somehow, any police officer in this country is given the awesome power and responsibility of potentially delivering the death penalty. In a matter of seconds, police are allowed to aggressively shoot dozens of bullets with impunity, killing American citizens. The authors of the United States Constitution did not have this in mind.

There are more questions that should be asked at the federal level. Do all cops really need guns? In Europe, not all police have guns. Are these young cops, right out of high school, trained well enough to be given the ability to deal out the death penalty?

It’s a shame that most of these shooting victims in the news have been people of color. This is not a race issue. Poor police training and bad prosecutors impact all citizens.

The death of Michael Brown in Ferguson, Missouri turned into a race issue. That was not the point. No lessons seemed to have been learned. This will all happen again, very soon.

Post Views: 660
This entry was posted in - Opinion. Bookmark the permalink.